Maybe I should shave the beard?

I was chatting with a woman the other day, and it came up that I had three kids under the age of five.

Her: Wow. You started having kids late in life.

Her: But that would make you...

Her: (pause) Well, you, uh, started early then. I guess.
Posted by wordswords 11 comments:

I wanna meet the
guy who splashed me with his car.
I'd like to punch him.
Posted by wordswords 5 comments:

Just before six this morning, I found myself sandwiched in the big bed between Henry and Jane. The alarm was still a few moments away, and the bed was extra warm and cuddly.

I gave Hen a little hug. He snored a contented 'snooooxx' in response.

I rolled to face Jane. I gave her a little hug. She took the palm of her hand, placed it on the bridge of my nose/forehead, and shoved.

Jane: Get off my pillow, Dad.
Posted by wordswords 2 comments:

Have I introduced you to my new best pal? 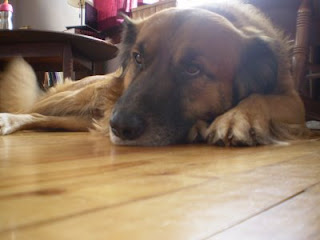 I took this picture about two weeks ago, when he first came to live with us. He was very happy to be here, but wasn't quite sure about his new life.

He fits into my silly little family so well. I really don't know how we got by without him.... laying on his back all the time, begging for a belly rub.

I will always miss Murph. But it's nice to have a best friend again.
Posted by wordswords 6 comments:

I used to have eleven toes: A late Valentine's memory

Grade 10. A conversation with my then girlfriend.

Her: No one has ever felt like this before.

Me: I even love the baby toe on your left foot.

Her: You can have it.

Me: Wow. Like, I can do with it whatever I want?

Her: Whatever you want.

Her: Um... I would hope you would chose not to.

Me: Riiight. So, we're talking, forever?

Me: Even if we break up?

Her: Yup. But that'll never happen.

We broke up a month later.

Valentine's Day the next year, her new boyfriend confronted me in the hallway of our school.

Boyfriend: I have to talk to you.

He took me to a quiet corner of the cafeteria.

Boyfriend: I need the toe.

Boyfriend: No, it can't happen like that. I must pay you for the toe.

Me: Ok. Should we draw up some sort of contract, or receipt?

Me: Yes... she would.
Posted by wordswords 2 comments:

The summer I was 17, I worked on my dad's farm. We had three main crops we harvested in succession. First, cabbage. Second, tomatoes. Third, peppers. (there was overlap, but essentially, that's how it worked)

Cutting cabbage is hard work, but fun. Dad drove the tractor in its lowest gear while a crew of six or eight followed behind. Each of us had a good-sized knife in hand. As quickly as you could, you grabbed a cabbage by the head, pulled it to one side to expose its thick neck of stem, and chopped. Then you launched it through the air to land in a pile on the wagon.

We'd do this from about seven in the morning until three in the afternoon. Dad would then park the wagon under a tree. We'd spend the rest of the afternoon packing the cabbages into waxed-paper boxes. Then he'd drive them to the wholesaler in town to sell.

The last day of cabbage season, we skipped the packing stage. Dad got a better price for the cabbage when it was packed, but this day, we just wanted to get it done. Instead of neatly packed boxes, we threw the whole wagon load into big wooden tote boxes which measured about 6x6 feet, and about 4 feet deep. Dad hauled them all to town to sell to the wholesaler.

The tractor came back down the road a few hours later, the totes still on the wagon. The market was flooded with cabbage, and wholesaler couldn't buy them. Dad wasn't happy about it, but the tomatoes were ready to pick, and there wasn't time to cry over a wasted day. There wasn't even enough time to empty the totes of cabbages...

July was hot. August was hotter. The thunderstorms of southern Ontario rolled in at just the right time. We were still picking tomatoes when suddenly, the the peppers were ready. Many days, we worked from seven in the morning until it was too dark to see if the tomato or pepper in your hand was ripe.

One morning, in about the third week of August, Dad tapped me on the shoulder and told me he had another job for me. He walked me and two others over to the cabbage wagon.

There was a bit of room around the edge of the wagon to stand on, so I climbed up. The stink was horrible: a combination of sweet rotting vegetables with hot, bitter vinegar. Over the past five weeks, most of the individual cabbages had rotted into slimy handfuls of dripping leaves.

I reached for what seemed like a tangible head. My fingers went right through it. As much of it as I could hold onto, I grabbed, and flung to the ground.

After about forty minutes, the piles in the totes had diminished enough that it was clear if we wanted to get any more out, we'd have to climb right in. I swung my leg over the side of the tote and sighed in disgust as my foot sank to my ankles in rotting goo.

I threw handful after handful of dripping rot over my head. The clouds of fruit flies were thick. Dozens of them ended up embedded in the crusts of cabbage juice that now stained my arms, legs and face.

Henry: Aw, Dad! I hate cleaning up my Lego! It's the worst job in the world!

Me: *Sigh.*
Posted by wordswords 5 comments:

*A little device we use every now and again to speed up Henry's sometimes excruciatingly-long bedtime ritual:

I sit on a bench; Henry ooches up to me on his little yellow scooter car.

Me: Hello, sir. Welcome to the Night-Time Drive Thru. Can I take your order?

Henry: What do you have?

Me: Tonight you can chose either the Self-Serve package, or our limited-time offer of a Full-Serve, All-inclusive Bedtime package.

Me: That means I do everything.

Me: Scoot through to the next window, please.

He scoots around and pulls up to the other side of the bench.

Me: Let's start with PJs. We have a delightful pair with a Racing Car motif I think you'd like.

He obliges. The PJs are on within a minute.

Me: And for your dental hygiene, do you mind strawberry-flavoured toothpaste?

He opens. I brush.

Me: I have a warm cloth for your face.

He closes his eyes. I wash.

Me: Excellent. I see here your account is pre-paid, so that's good. I'll just give you your complimentary hug (we hug), and you can drive up to the couch where a nice lady is waiting to read you the book of your choice.

Me: Not at all, Cornbread. Come again.
Posted by wordswords 3 comments:

Erin: You know, Jane, an apple a day keeps the doctor away.

Jane: (chewing faster) No want doctor take away my apple.
Posted by wordswords No comments: