...unlike that moralizing jerk Santa.

Sunny Saturday afternoon. Tomorrow is Easter.
We're hiking on our friends' farm. Jane is explaining to Margaret about the Easter Bunny.
Jane: He comes in our house at night and hides eggs for us to find. Chocolate eggs.
Margaret: Mmmm. Sounds like my kind of bunny.
Jane: And you don't even have to be good for him.
Posted by wordswords 1 comment: 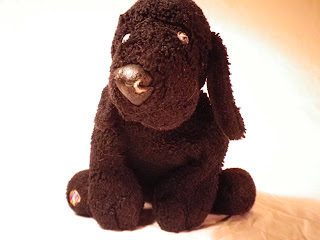 This is a portrait we took of Creamy before Christmas to give to Henry as a present. I'm so glad we have it, because, alas, we no longer have Creamy.

Creamy was lost this morning as Erin and the kids did some running around in town. They searched everywhere. He's gone.

So many nights have we delayed bedtime as we've searched the house for this little dog. He has been dragged around the yard, rescued from beneath the couch dozens of times, and survived a couple of surgeries.

He was named Blackie when we first got him. Henry wasn't initially terribly fond of him, but he latched onto him as soon as we moved to Cape Breton. One day at Tim Horton's, a bit of coffee cream spilled on his leg, and he was Creamy ever since.

Henry shed a lot of tears this morning when he realized he was gone. Erin drove all over town, retracing their steps, but they couldn't find him. I hate the thought of that dog sitting in a puddle of slush on this cold, dark night.

But things aren't so bad, thanks to my co-worker Ty and his daughter Sadie.

Today, in my office.

Ty: I don't want to get your hopes up, but I think we may have a dog that looks just like Creamy.

Ty: I'm not 100% sure, but if it is, I'm sure Sadie would love Henry to have him. She went through a phase of loving those animals about a year ago, but has grown out of it.

A few hours later, he tweeted me this photo. 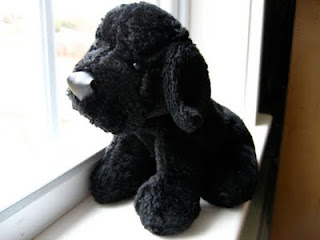 It's the exact dog.

As we drove out to Ty's place this evening, we came up with the story that made Henry feel better. Creamy went to the vet to fix some of his problems with stuffing, scratched eyes, and worn out nose. But he ran away. Lucky for us, he ran to Ty's place in Cove Head.

Henry made Sadie a thank-you card. When he met New Creamy he gave him a big hug, and everyone felt better. Until the car ride home. Erin caught Henry with tears in his eyes.

He wiped his eyes.

Henry: I'm not crying. I just breathed in funny and it came out like crying.

Friggin' stuffed dog is making me cry. (and probably Erin)

The Superstore called about a half-hour before closing to say they'd found Creamy. The next day was Good Friday, so if I didn't get there right away, we'd be Creamy-less until Saturday. I sped all the way and did some serious negotiating to get past the doors as they were being locked for the night. 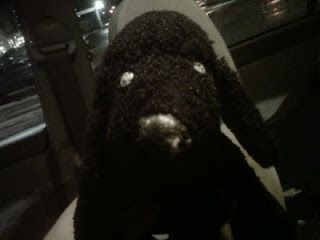 Henry was asleep when I got home, so I put him beside his head on his pillow. He awoke the next morning and flipped out.
Henry: He's everything good that makes Creamy Creamy.
Thus endeth the saga.

Most importantly, this Creamy.

He is a ratty little stuffed dog who no one in the world would love but my heart-broken son.

Henry had him this morning in Charlottetown as he accompanied Erin to a doctor's appointment, and later at the grocery store. Erin went back to check, but couldn't find him.

If you find him, can you please let me know? Henry is destroyed by this.
Posted by wordswords 2 comments:

In the car.
Jane: Daddy! Craig and Margaret asked us to watch their farm for a few days this summer!
Me: I know! Isn't that exciting?
Alice: They has horses!
Me: I know!
Henry: And a llama! And sheep!
Alice: Aaaaaand (thinking) chickens!
Henry: We can find eggs!
Alice: And they has a donkey!
Jane sits back in her car seat and smiles.
Jane: And a huuuuuge TV.
Posted by wordswords 3 comments:

Erin puts the water on to boil. She takes down the small pot given to us by our wonderful neighbour in Cape Breton. When the water is ready, she steeps the tea and brings it to the dining-room table.

The girls wait with their china cups before them. Erin puts a small amount of milk in the bottom of each cup before pouring in the tea. The girls add their own honey.

Alice stirs her milky-brown tea, listening to the tinkling sound of her spoon gently striking the inside of her china cup.

Alice: Can I have marshmallows?

Henry is barely two.
It's evening. He's having trouble falling asleep. I lay beside him on his bed, waiting for him to drift off.
His breathing becomes slow and heavy. I am sure he is sleeping. I am pretty tired myself, and consider joining him. I am very relaxed.
I pass gas.
He passes gas.
Henry: Our butts are talking, Dada.
Posted by wordswords No comments:

Erin and the kids are making plans to visit our friends' farm. Jane remembers a run-in she had last time with a donkey named Ruth.

Jane: Ruth pushed me over. Twice.

Jane: Why would she do that?

Erin: She was jealous.

Jane: Why would that make her push someone over?

Erin: If I spend extra time with Henry or Alice, you feel jealous and it makes you impatient and sometimes even angry.

Jane: You sometimes get jealous, too, Mum.

Erin: Not really. Older people usually learn to be patient about things like that.

A light clicks on in Jane's mind: a realization of a universal truth.

Jane: Donkeys and children get more jealous than mummies.